The value of justice 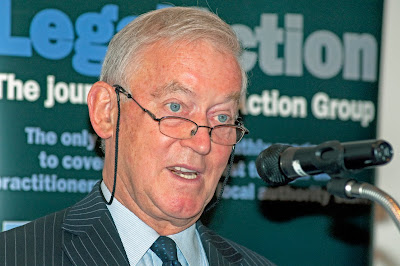 District Judge Nicholas Crichton takes exception to the recently announced ?41m increase in the cost of the opening and closing ceremonies for the Olympics. It is difficult not to agree with him, however much you might be looking forward to next year?s festivities, especially when vital services such as the Family Drug and Alcohol Court (FDAC), which he leads, have a financial question mark hanging over their future.

Last night DJ Crichton, along with consultant child psychiatrist at FDAC, Dr Mike Shaw, and FDAC's service manager, Sophie Kershaw, gave LAG?s annual lecture. DJ Crichton sees FDAC as a 'problem-solving court' which gets results because of the strength of its interdisciplinary team. He does not tolerate delays and pointed out that the court is geared towards resolving issues over the custody of children quickly. Dr Mike Shaw stressed the importance of doing this as 'relatively short periods of time represent a big portion of a child?s life' and the need to establish attachment bonds between parents and children early in life.

Inspired by a trip to the US, where there are between 15-20 similar courts which try to tackle the problem of drug and alcohol addicted parents, DJ Crichton persuaded the government to establish the FDAC in January 2008. Parents are offered intensive treatment and support to assess if they can have continuing contact with, or custody of, their children. It is not a soft option. They are expected to attend court every two weeks to report on progress and are subject to regular drugs tests.

DJ Crichton spoke of the pride of some parents when they appear before him to report their success in staying off drugs. Some are not successful. At the lecture, he told the heartrending story of a mother who had received two months of treatment from FDAC, but realised that her rehabilitation would take two years. This was too long for the FDAC process, which expects to resolve issues over the care of children after nine months, and the mother agreed to give up her baby for adoption.

Research has shown that the FDAC approach works (see below) - it manages to reunite more mothers with their children; more parents get treatment to deal with their addictions; and more parents stay together after the court?s final order. Sophie Kershaw argued that the cost of a case at around ?12,000-13,000 is not expensive, as most of the costs are met by local authorities and 'parents who have learnt on the way [through the FDAC support] are less likely to contest a care plan'. This also saves costs.

Despite the success of FDAC (the service has won four major awards - see below), no renewal of grants has been agreed by the government when the current funding ends in March 2012. This prompted DJ Crichton?s remark to LAG about the increase in the cost of the Olympic ceremonies which he thinks cannot be justified given the austere times the country is facing.

LAG believes the doubt over FDAC?s continued existence is a symptom of the government?s obsession with budget cuts without regard to their wider impact. Helping parents resolve addiction problems while protecting children saves other costs to the government. Above all the work of FDAC should be valued as providing a beacon of hope for tackling social problems that no-one in the family justice system believes the law and the current courts system can adequately deal with.

Visit: http://www.lag.org.uk/Templates/Internal.asp?NodeID=93969 to read the evaluation report on the work of FDAC and find out about the awards the FDAC team has received.

An abridged version of the speech will appear in the February 2012 edition of Legal Action journal.