Lawyers in Wales have agreed to strike over UK government proposals to reform criminal legal aid.

The Wales and Chester Circuit of Barristers has voted unanimously to refuse to sign up to a new system regulating the quality of criminal lawyers in England and Wales.

Barristers will also refuse to attend court if the plans are implemented.

The UK coalition is trying to cut £2bn it spends on what it calls one of the world's most expensive legal systems.

Possible changes to legal aid in criminal law include fee cuts of up to 17.5%, price-competitive tendering for legal aid contracts and clients no longer being able to choose their own defence lawyer.

This is a threat I'm afraid that the government will see coming into force sooner rather than later?

Andrew Taylor, a Cardiff-based barrister, told BBC's The Wales Report with Huw Edwards that he and his colleagues were striking because of the serious concerns they had that the changes would restrict people's access to justice in Wales.

"The justice system in Wales at the moment is very much in danger. The effect of these cuts if they come in, to Wales in particular, will be absolutely devastating," he said.

"Freedom of choice will go. The provision of legal services in Wales will be very much reduced. People will be denied access to justice."

The Ministry of Justice says that the changes to legal aid for criminal cases would save a further £220m per year by 2018-2019.

The criminal legal aid consultation closes in June, but cuts to legal aid for civil cases have been in effect since the beginning of April. 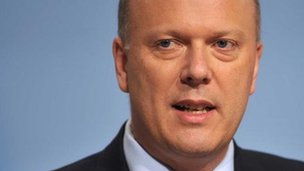 But a Bridgend family who relied on legal aid to fight their daughter's medical negligence case have called the legal aid cuts in this area "unethical".

Emily Weaver, 26, was born with cerebral palsy, and when she was two, doctors failed to spot that a tube draining fluid from her brain had blocked.

The delays in diagnosing and treating the problem caused her to suffer further brain damage, losing her sight and most of her hearing.

Legal aid funded the Weavers' successful medical negligence claim which ultimately provided care and equipment for the rest of her life.

At £2bn a year we had one of the most expensive legal aid systems in the world, and it was costing taxpayers too much at a time when resources are not limitless?

But now, under the new rules, Ms Weaver would not be eligible for legal aid to take her case.

Legal aid is only available in cases of clinical medical negligence where a child has suffered severe brain damage during pregnancy, or up until two months of age.

Ms Weaver's father John said that without legal aid, they would not have been able to take the case.

Lawyers are warning that without access to legal aid in many areas, more and more people will be forced to represent themselves in court.

Mr Weaver said: "To attack the most vulnerable people in society and people who already have a great disadvantage, and take away the little hope they've got, I don't care what government it is - it's unforgiveable."

In a statement to The Wales Report, Justice Minister Lord McNally said: "In recent years, millions of pounds of taxpayers' money has been spent effectively encouraging people to take their problems to court when there are often quicker, cheaper and less stressful options available.

"At £2bn a year we had one of the most expensive legal aid systems in the world, and it was costing taxpayers too much at a time when resources are not limitless.

"We had to make some difficult decisions, and it was not a process we embarked on lightly, but we have safeguarded legal aid to ensure lawyers are there for those who really need them."