An earlier version of this post appeared here
Breakfast courts for cereal offenders? The new proposals amount to a serving of cold porridge, and advocates will need strong coffee when courts start sitting for 9 hour days...
Defence lawyers who practice regularly in North London, along with the LCCSA and other representative bodies, were taken unawares by a recent announcement relating to a proposed "extended hours pilot", including one at Highbury Corner Magistrates Court. There  has regrettably been no proper engagement with defence representatives about this pilot, which is intended to start in May, as reported in the Islington Gazette
HMCTS propose to pilot a "split-shift" scheme in Newcastle and Blackfriars Crown Courts, together with Highbury Corner Magistrates Court. The pilot Crown Courts courts will sit from 9-1,  followed by a second session from 2-6. The proposals in the Magistrates Court are to start at 0800 (so arrive 0700 to take instructions) or finish at 2030 (unless sitting even later due to over-booking etc)
The proposals have led to criticism from practitioners and Judges, and an LCCSA protest reported in the tribune 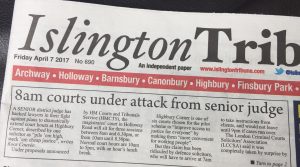