The LCCSA are opposing the proposed new pilot for extended court hours at Highbury Corner- see here  for details of the proposal dubbed the "breakfast court".
Update -as at 1st April 2017
The Association has now  received a response to  submissions and questions to HMCTS- and are delighted that the Court Service have confirmed there will be free coffee and croissants for all the lawyers participating in the pilot. There will also be vegan snacks for the more right-on law firms, and court staff will have a breakfast buffet, with the toast "buttered on both sides".
In response to a question to the MoJ about whether defendants will be eligible for the breakfast bonanza, a spokesperson for the Lord Chancellor Liz Truss said they could promise that they could all expect to be eating porridge "very soon after their arrival".

01  April?! - yes this was an April Fools Joke. Sadly, the pilot itself is not a joke-although it is very foolish.
Below- a reminder of how last years April Fool gag (the return of Chris Grayling) was reported in the Times... 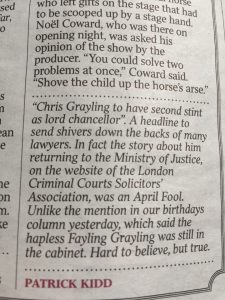