Wide Support for Amendments to the Legal Aid Bill 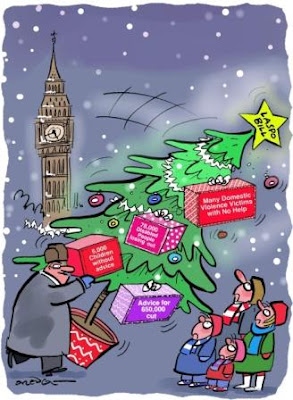 Today is the last day for peers to submit amendments to the Legal Aid, Sentencing and Punishment of Offenders (LASPO) Bill. The LASPO Bill is due for its first day in the committee stage in the House of Lords next Tuesday (20th). There is widespread support amongst peers for changes to the Bill.

Perhaps the most surprising supporter of an amendment is Lord Tebbit, the former conservative cabinet minister and right wing political bruiser, famous for his outspoken pronouncements. In 1981, in a curious echo of contemporary events, commenting on the possible link between unemployment and the riots which had taken place that year he said, ?I grew up in the '30s with an unemployed father. He didn't riot. He got on his bike and looked for work, and he kept looking 'til he found it.?

Lord Tebbit is supporting an amendment which would bring back legal aid in medical negligence cases concerning children. This is one of the sections of the Bill, which LAG and other pressure groups want to see changed. Many other provisions in the Bill identified as priorities for changing have been covered by the amendments submitted so far. For example an amendment on clause 8 of the Bill, put down by Lord Pannick, Lord Woolf and Lord Faulks, deals with the issue of giving the government powers to put areas of law back into the scope of the legal aid scheme. LAG believes this is important, as without it none of the proposed cuts could be reversed without new legislation. Previous legal aid acts have allowed for changes in what the system covers without primary legislation.

An amendment by Baroness Scotland of Ashal addresses the important issues of the definition of domestic violence and the criteria for qualifying for legal aid in such cases. Lord Bach and Lord Beecham have also put down a number of useful amendments, including one which provides for the establishment of an independent tribunal to review decisions on entitlement to legal aid. LAG believes that both in appearance and practice, decisions on whether cases should be paid for by legal aid must be subject to independent adjudication, otherwise the government will be put in the invidious position of reviewing decisions on whether to grant legal aid for cases against itself.

There is a good spread of support amongst peers from all of the political parties for the amendments. Non-political cross-benchers are particularly prominent in their support of amendments which contradict government policy. Prominent among these are heavyweight legal figures such as Dame Butler-Sloss, former President of the Family Division, who is supporting a number of amendments, one of which would reinstate entitlement to civil legal aid for people with dependent children.

A letter sent to peers this week from the government minister Lord McNally offered no concessions and reiterated arguments made in the House of Commons stage of the Bill in favour of the cuts to legal aid. In essence Lord McNally, who is in charge of trying to steer the Bill through the Lords for the government, was saying- times are hard and we have to make these cuts. LAG believes he is unlikely to be able to continue holding this line, given the breath of support for many of the amendments. Perhaps its time for him to get on his bike and look for some compromises? Otherwise, the government risks some heavy defeats on the LASPO Bill in the Lords.

Pic: Christmas card sent to members of the House of Lords from the Justice for All campaign