We often have clients who find it difficult accept the court's decision.  And today , if ever there was a time to empathise with that view, it’s now.  The stakes, not just for us legal professionals but also for the all-important access to justice, are so high.
During the hearing the court asked:

" what will happen to all the solicitors who don't succeed in bidding for duty contracts ?"

They clearly recognised the serious consequences of the proposals, as did Mr Justice Burnett during the first JR when he described the impact of the proposals upon individuals as “Very Profound”.
Put simply, this case is one of great constitutional importance with significant ramifications for access to justice.
The fight still goes on.  It seems that whatever their view of the proposals, the court was of the opinion that it wasn't their role to intervene in political decisions.  We are concerned that both the submissions of the Lord Chancellor and indeed the judgment itself has been based on the premise that the second cut was inevitable. This really matters, as with that assumption came the belief that the dual contracting was urgently needed. This is news to those professionals who were given assurances that the second cut was subject to a review alongside the 8.75 cut to advocacy fees.

We are therefore pleased to confirm that our legal team along with those instructed by The Law Society have advised that there are grounds to appeal and will be seeking to extend the injunction on the tender process.  A new government, after all, may choose not to proceed with this scheme and certainly do not wish to deal with the collateral damage caused by the Government's drive to proceed with it.  The Court refused leave to appeal this morning but granted an extension to the injunction pending an expedited appeal on 27th February 2015.
Our initial grounds of appeal can be found here 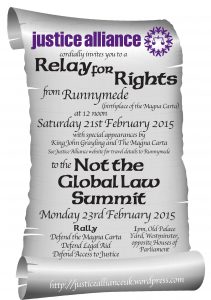 This approval by the judges will give Mr Grayling a peg upon which to hang his “friend of justice” cloak as he addresses the global law summit next week , in order to mask the damage he is universally recognised for causing to vast swathes of our criminal justice system.
Please join us in showing our universal opposition to the proposals and Grayling’s hypocrisy by attending the "not the global law summit" events.
Tell colleagues and friends.
Numbers are important - join us on the 23rd February 2015 at 1pm at the Old Palace Yard .