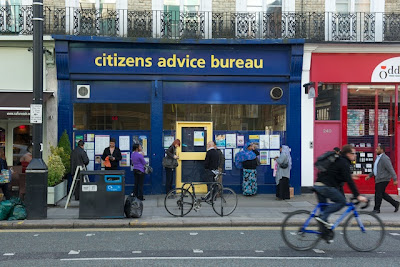 Research published today by LAG has found that 88 per cent of Londoners believe advice services should be free to everyone, or to people on or below the national average income of ?25,000. The London Advice Watch (LAW) report also finds that 77,000 Londoners will lose out on help with civil legal problems and that ?9.33 million will be cut from advice services, if the reductions in legal aid proposed by the government go ahead.

The LAW report used data from an opinion poll survey carried out by polling company GfK NOP for LAG, as well as interviews with providers of advice services and their representatives in London. GfK NOP interviewed 1,603 people across 32 London boroughs.

In addition to overwhelming support for the availability of free services the opinion poll found that:

? 94% of people who got advice received a free service.
? 81% of people were satisfied with the service they received.
? 65% of people said their situation improved due to the advice they had received.

London?s population of 7.6m is served by 900 legal aid suppliers including 80 charities. Many of these will be forced to close or severely curtail their services if the government goes ahead with its plans to cut back on civil legal aid. For example, Law Centres in London will lose 43 per cent of their funding and some may be forced to close. Other advice agencies will also be badly hit. Brent Citizens Advice Bureau holds legal aid contracts in housing, benefits, debt and immigration law. Under the government's plans, detailed in the Legal Aid, Sentencing and Punishment of Offenders Bill currently going through parliament, it will lose ?275,000 a year in funding and will be forced to close its specialist casework services in these areas of law.

LAG anticipates that amendments to the Legal Aid Bill, which would put back into scope the areas of work being cut in housing, employment, benefits, debt and immigration law, will be debated next week in the House of Lords. LAG is urging peers and the government to think again, before cutting legal aid to thousands of Londoners and the hundreds of thousands of ordinary people across the country who will lose out on help with civil legal problems if the bill is not amended.

LAG is launching the LAW report this afternoon at a special meeting of the All Party Parliamentary Group on Legal Aid in the House of Commons. The meeting will be hosted by Yvonne Fovargue MP and speakers will include Tom Brake MP, the Liberal Democrat MP for Carshalton and Wallington in south London, Liberal Democrat peer Lord Carlile and Andy Slaughter MP, Labour MP and Shadow Justice Minister.