We Stand United in the Fight for Justice 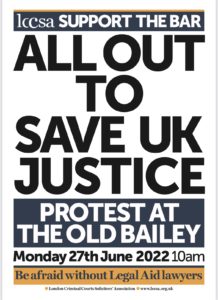 Our message is simple: We stand united in the fight for justice.

This weekend our colleagues at the Bar have taken a drastic step. Following the ballot by the Criminal Bar Association, barristers will walkout from courts for the first time on Monday June 27th.

They have taken the decision that words must now be backed by further action. From next Monday criminal barristers will escalate their working to rule (‘no returns’) policy to a first day of walkouts and will refuse to take new instructions.

The dire state of legal aid, court backlogs and lack of a viable government plan to secure the healthy future of justice and its professionals have driven our colleagues to this point.

As an association, we stand together with our colleagues at the Bar. Their fight is our fight and vice-versa.

The current so-called 15% offer from government is insulting, we’re being sold a dud. It’s NOT in real terms 15%.  In fact, it’s more like 9% and not until October. £135 million is the minimum needed to throw a lifeline to criminal defence.  To regenerate our ageing profession the government must do more to attract young solicitors, with an immediate cash injection and a structured pay review needed.

We’ve listened: We are already boycotting low-paid burglary cases. London firms have been routinely saying no to taking on these especially badly paid cases. A survey of LCCSA members found 95% support. The same number (95%) also backed mass action. The last time this happened was in 2013 when thousands marched on Westminster and Whitehall.

The first united protest of solicitors and barristers is Monday 27th June at Old Bailey at 10 am.

We understand that our attendance at the protest will have an impact on the magistrates’ court, but our voices must be heard.

We have arranged a remote meeting this Thursday 23rd June at 17.30 to answer any questions you may have as to the practical implications of attending.