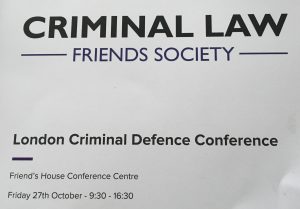 At the London Criminal Defence Conference on Friday 27th October, organised by the Criminal Law Friends Society, the LCCSA were pleased to have been invited to present the closing address to the 400 delegates. 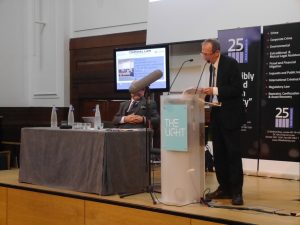 The  brief , 7 page , evidence free response from the MOJ to the 1000 responders to the Consultation to cap page count to 6000 in the LGFS was described by Greg Powell  as “astonishing.”
Although the LAA claimed there had been a surge in higher crime fees post Napper this was contested by the LCCSA in our response . In fact because VHCC work had been decanted into the LGFS total spend had not increased .
He added “We will be meeting the Law Society and other practicioner groups to discuss Judicial Review .The MOJ plan to lay regulations to make the cut effective from the 1 December .
We seek unity , urge you all to join the LCCSA and help campaign .We need to fight for the restoration of value and scope across the whole legal aid scheme”
Seconding the call for unity was immediate past President Greg Foxsmith, speaking in a personal capacity, who said lawyers can unite in opposition to MoJ idiocies such as Legal Aid cuts, the LGFS decision (above) extended court hours and the LAA 14 hour requirements in the new duty contracts. 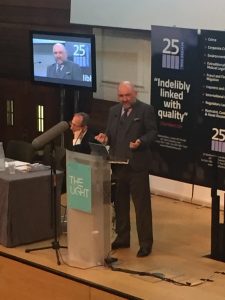 He suggested unity was best achieved when lawyers have an effective, accountable and diverse representative body such as the LCCSA, and encoraged delegates to join. The full text of his speech is here
Note A reminder that the AGM is on 13 November 2017
Below-LCCSA Presidents past and present with CLFS Conference Organiser Steve Kennedy 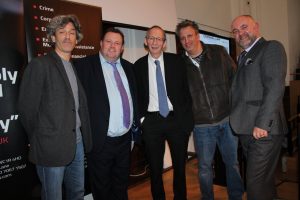