Crown Prosecution Service (CPS) chief information officer David Jones has a lot on. As well as leading a comprehensive technology revamp at the CPS he is also behind an IT-led transformation aimed at streamlining and modernising operations across the entire criminal justice system (CJS).

Criminal justice in the UK encompasses six agencies, with core departments including the police, the courts, the National Offender Management Service, the Youth Justice Board and the CPS itself. These bodies are engaged in a project named CJS Efficiency Programme, which will undergo its first review this month. 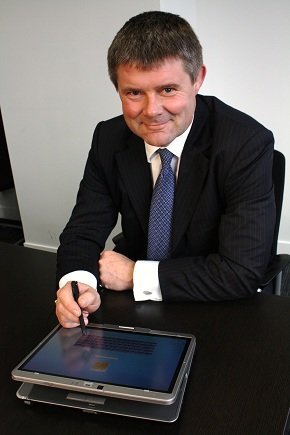 Jones was appointed director of technology transformation for the CJS project last September, with a brief of ensuring the objectives are met ? namely, reorganising the system?s operations and improving use of digital and video technologies.

The programme was prompted by the realisation that the various agencies were working towards similar aims and that carrying out the work under a single plan would be far more beneficial.

"The CJS, up to the door of the court, has been largely digitised [and the aim is] to be fully digital by April 2013. It is still work in progress but there?s been significant advancement,? Jones told Computer Weekly.

According to the CIO, the project has been a success in moving criminal justice from a paper-based system towards a predominantly digital service.

There are a wide range of projects going on in CJS bodies such as the police, with the aim of modernising all key processes? from taking statements to using CCTV-based evidence, as well as exchanging information between police forces.

"Nearly all police case load is being served digitally to the CPS and onwards to the magistrates? court, with detailed plans in place to increase to full digital working over the coming months,? Jones says.

The video aspect of the programme is part of the efficiency agenda. The goal is to use the technology in CJS work in areas such as police-to-court links. This would allow staff to take part in court proceedings via video link and for cases where physical presence is not mandatory, individuals at remand centres could also attend court sessions by using video technology.

Jones says savings could be found by eliminating expenses and time associated with physical attendance to courts with video transmissions, but could not give a specific figure. He also could not tell how much the CJS bodies are investing in defining common video-based technologies.

"We are taking an agile approach to this and are not putting huge amounts of money in. We haven?t worked out the full monetary significance but we are testing what appear to be obvious capabilities and are not talking about a massive investment,? he says.

Right from the outset we brought all the disciplines together ? policy, process, training, people, technology

While the April 2012 review is about a milestone that has laid the foundations for the CJS programme, the efforts around it will continue, with plans in place to deliver full digital working within a year.

"While there is still more to do, digital working has led to more streamlined administrative processes,? he adds.

The initial meeting of ministers, senior government officials and the judiciary that originated the CJS Efficiency Programme in December 2010 set "a very strong guideline? to get the initiative as far as possible by April 2012, says Jones.

Given the number of different agencies that are part of the CJS, as well as the various technologies and investment cycles governing these agencies and the fact they are all working towards a common goal, significant progress has been made.

Citing some accomplishments of the scheme in other CJP bodies, Jones says that by this month, 38 out of 43 police forces will be interacting in a predominantly digital manner. Additionally, common information exchange standards between the CPS and Magistrates Courts will be up and running and work on video links will be well underway.

About 60% of CPS prosecutors will be working on tablet computers by the end of April. Many are already using electronic preparation of evidence for complex cases under a framework agreement which allows evidence to be presented and shared digitally and coherently across the various agencies.

"We are moving pretty well, but there is still an awful lot to do. We have got to embed [the new technologies] and ensure we don?t slip backwards, which happens too often in change programmes - once it?s over, people retrench too quickly and we are not allowing that to happen,? says Jones.

"We have gone as fast as we possibly could and will find out whether that is good enough for those who set the targets when they take a review towards the end of April,? he says.

"But I would hope they would look fondly upon us and not be too harsh [about what still needs to be done]. But I am not underestimating that we have to press to ensure that we finish this job off.?

He says that "all of the chunky projects? should all be concluded within the next 12 months.

Examples of change brought about by the CJS Efficiency Programme can also be seen at the Crown Prosecution Service, where Jones has led the Digital Working scheme. The plan includes a digitisation effort carried out over the past year, as well as a move to equip all prosecutors with tablet devices to replace paper files.

More than 1,700 tablets have been provided to prosecutors so far under a programme carried out by supplier Logica, and the plan is to roll out 3,500 HP tablets running Adobe software by the end of May. The move cost the CPS about £4m.

"[The tablet rollout] will enable court personnel to work in a remote fashion, meaning they will no longer carry vast quantities of paper. Last year we printed around 330 million sheets of paper and that will go down rapidly as we move to digital services,? Jones says.

A focus on usability meant the new technology has not taken a great deal of training.

"[Prosecutors] now have the ability to work with digital files which feel and act very similar to how you would use a manila file. Right from the outset we brought all the disciplines together ? policy, process, training, people, technology,? Jones says.

"I am not underestimating the amount of cultural change and staff commitment that was necessary for this programme. But they have embraced it, worked through the issues with IT and were very pragmatic all along. Without that type of commitment, help, direction and learning we would have struggled.?

The CIO is already thinking about what will happen after the wider transformation is complete across the CJS bodies and the demands that could be brought about by the current technology-driven change.

One of the possibilities is a data repository system to handle case information volumes. This would give agencies a short-term ability to move large amounts of data around more effectively and give a better view on how to approach cloud computing in the medium term.

"We talk about how you move data around, but we haven?t stepped into how you then store that data: do you keep it all in one place; how do you access it? We will get a view on that for the next level of large investment for the justice system - sometime between 2014 and 2018 depending on the agency you are on,? Jones says.

With digital working being introduced as a standard, "big data" becomes  a clear concern.

"As you take digital approaches to an operation, many questions begin to be asked, such as how and where to find information, what data is actually  available and how does that compare with different agencies,? says Jones.

"I?m anticipating those questions will arise over the next 12 months but I also don?t believe this would necessarily involve massive infrastructure investment. I will be far keener to look into low-value investment at the application level, for instance."

CPS has already been exploiting Microsoft SharePoint to that end and is working with other CJS agencies and the Cabinet Office on alternatives to enable agencies to share data internally in an effective, secure and transparent manner.

The trickiest part in leading such a transformation, according to Jones, is understanding each of the CJS agencies and considering their own accountabilities to government, while bringing different agendas together and working collectively. Jones says this has been possible thus far.

"When people talk about challenges, they often think of it negatively, but this has been something we have worked on together. That attitude of ?I am not doing that because it is not in my personal interest? has not been seen at all,? he says.

The CIO?s biggest concern, however, is people saying that change has a start and end date.

"You should always be looking to do as much as you can. If you say it is all done, everyone breathes a sigh of relief and you lose some of the energy and momentum around it,? he says.

"I am a believer in seeking change in a coherent way. But I am also worried about declaring something done for what is a very complex and wide-ranging activity.?

Next post: London’s crime stats analysed: which borough has cut offending by the biggest margin?