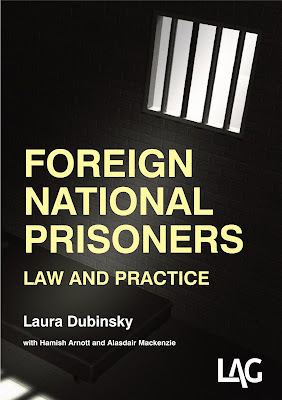 Last night LAG launched its latest book, Foreign National Prisoners: law and practice. The law permits prisoners from foreign countries to continue being detained on completion of their sentences pending deportation. The book discusses the legal procedures which permit this, and prisoners? rights to appeal against their detention and removal. In some circumstances the Home Secretary is permitted to detain foreign nationals pending their deportation even if they are not accused of committing a crime in this country. Abu Qatada, whose application for bail was decided on Monday, is one such case. This is a controversial area of law, as the detention of people for long periods who have either completed their sentences, or have not even been charged with an offence, is contrary to previously accepted principles of UK law.

Abu Qatada promulgates repugnant views in support of al-Qaida, but has never been charged with a crime in the UK. He has been detained for over six years, as the application for his extradition to Jordon was considered. The Jordanian authorities want him to stand trial on terrorism-related offences. Edward Fitzgerald QC, head of Doughty Street Chambers, said at the book launch last night: 'Like all great books it has come at the right moment.' Referring to the Abu Qatada case, in which he represented Qatada in his bail application this week, he added: 'It is a book being launched into stormy waters.'

Defending the rights of foreign national prisoners is not a popular cause - much of public and political opinion is hostile towards convicted criminals and people accused of crimes in foreign countries, such as Abu Qatada, being allowed to remain in this country. However, often in these cases the law has to work impartially for the sake of both justice and the greater moral good. The Qatada case hinges on whether a trial can be considered fair if it relies on evidence obtained by torture. The European Court of Human Rights has ruled that it would be illegal to deport Qatada in these circumstances. Torture is wrong and cannot be condoned by a civilised country. LAG believes this is a moral and legal principle which supersedes the deportation of a criminal suspect no matter how hateful their political opinions may be.

Speaking to LAG, the book?s main author Laura Dubinsky said: 'Foreign national former prisoners, including non-violent offenders, are often administratively detained for prolonged periods after sentence completion, sometimes notwithstanding very remote chances of deportation actually occurring.' She explained that the UK is now alone in the European Union in having no time limits on the administrative detention of immigrants; and that there are no automatically scheduled bail hearings for those held under Immigration Act powers in the UK: 'Effectively, the onus is on a detained immigrant to seek bail. All this poses grave obstacles for those unfamiliar with the justice system and who may not speak English; these difficulties are now being compounded by a lack of legal representation, as legal aid cuts are forcing the closure of many services which provided publicly funded legal assistance for migrants.'

Laura Dubinsky is a barrister at Doughty Street Chambers and practises in public law, specialising in immigration law, prison law and challenges to administrative detention. Hamish Arnott, a solicitor at the firm Bhatt Murphy and Alasdair Mackenzie, another barrister at Doughty Street Chambers specialising in this field, also contributed chapters to the book.

Link to the decision in the Abu Qatada bail application case